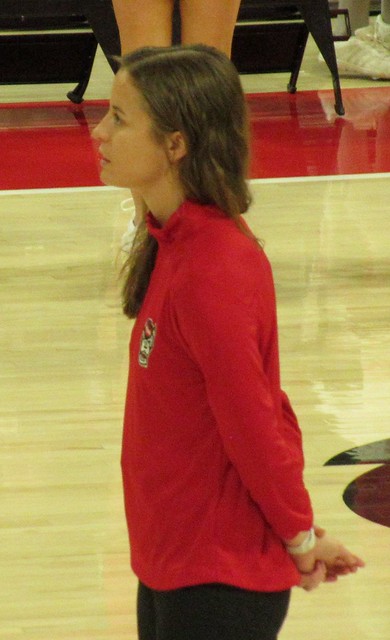 We Love Ashley Williams being back with the Pack!

While State returned to the top ten (10th) of ESPN's Monday Power Rankings for Women's College Basketball, one might be surprised to see that Notre Dame is 5th and UNC is 7th. Also surprising is the preseason ACC favorite Louisville is 14th, one lower than the preseason second place team VaTech. The Hokies are 6-0 while the Cardinals are 5-2.

Also, how is Iowa with two loses 9th? I watched Iowa play UConn Sunday and they can shoot the arc shot, but after building an 11 point lead at 6:30 of the third quarter, Azzi Fudd woke up. Fudd ended up with 24 points scoring 22 in the second half of the Iowa game which included 16 in the third quarter when she went 7-7 from the floor.

The Wolfpack and the Hawkeyes, who meet Thursday in the ACC/Big Ten Challenge, have a loss to UConn in common. NC State struggled more against the Huskies, but regrouped this past week with victories over Vanderbilt and West Virginia in the Cancun Challenge. Center River Baldwin, a transfer from Florida State, had her best game so far for the Wolfpack with 18 points and 11 rebounds against West Virginia.

When I wrote the fanpost with regard to portal transfers affecting the ACC, I failed to realize the impact six-four center Lauren Ebo would have for Notre Dame. Ebo transferred to Notre Dame as a graduate student after stops at Penn State and Texas. Notre Dame gets tested this week playing at Maryland on Thursday then hosting UConn on Sunday.

That UNC is doing so well this year is no surprise to fans of ACC Women's Basketball due to how well Coach Courtney Banghart has recruited since becoming the Tar Heel Coach. Fans after watching State pretty much beat UNC like a drum since 2016 knew it would get much harder for the reasons stated above. Still think we can take them this year. Thursday UNC goes to Power Ranking 6th Indiana for the Big Ten Challenge; however, Indiana may be without six-foot Grace Berger.

Just wondering if any of the ACC's top Power Ranking teams are playing at home for the Big Ten Challenge. VaTech and Louisville are but they are 13th and 14th in the Rankings.