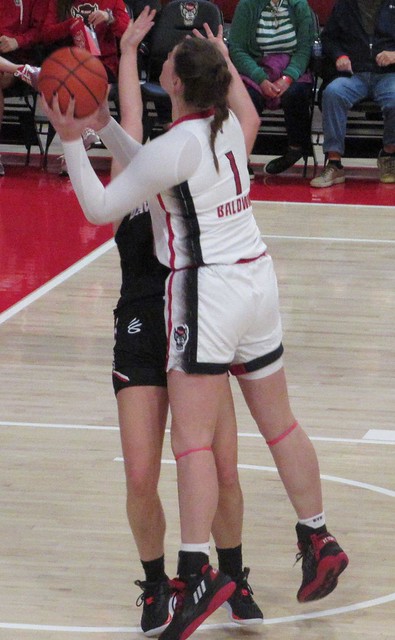 State's record against Syracuse is 9-4 which includes a current 5 game winning streak and a 4 game losing streak. State's last win was a 95-53 win in Raleigh on February 20th of 2022. State lost those four in a row from January 25th 2015 to January 14th 2017. Two of those four losses were at Syracuse, one at Broughton High School in Raleigh and one in Greensboro during the ACC Tournament. State's first game against Syracuse, a 104-69 win, was played in 1996 in San Juan Puerto Rico.

In Syracuse's loss to Louisville, Syracuse besides the above mentioned players started five-eight senior Alaina Rice and six-foot sophomore Georgia Woolley who also followed Coach Legette-Jack from the University of Buffalo. Players getting significant minutes off of the bench in the Louisville game were Wichita State transfer six-two graduate student Asia Strong and five-nine junior Cheyenne McEvans who also followed Coach Legette-Jack from Buffalo.

Team wise Syracuse shoots 429 from the floor; 286 from the arc. Syracuse assist to turnover ratio is 0.9.

I like State in a close game with Diamond and Jada playing because it is always hard to play at Syracuse. In view of State's performance against Duke, I cannot positively pick State to win if Diamond does not play.

I have read some comments that State did not play hard against Duke. Sitting court side for the game, I disagree with such comments. I thought the team played very hard but seemed lost on offense especially against the press and at times confused on defense leaving open arc shooters-especially Duke's Taylor. I am perplexed with regard to State's handling of Duke's full court press as Clemson used a similar press. Diamond would have made a difference in the Duke game against the press, but note that she did not play against Clemson and State handled that press reasonably well.

Two other conference games worth watching on Sunday are Louisville at Duke at 12 p.m. (RSN) and UNC at VaTech at 4 p.m. (ACCN)