Time will tell if he's "the" best, but Kevin Keatts is among the best coaches that were hired five years ago. Yes, even with this last season. "Bah!", I imagine you saying, "We have expectations that aren't being met!" Yeah, yeah. Everyone has expectations. We haven't been able to complain our way to greatness in the last 30 years. Have some perspective. There were 12 major conference program vacancies five years ago and NC State has had one of the best results of those 12. You can see those results in one chart. 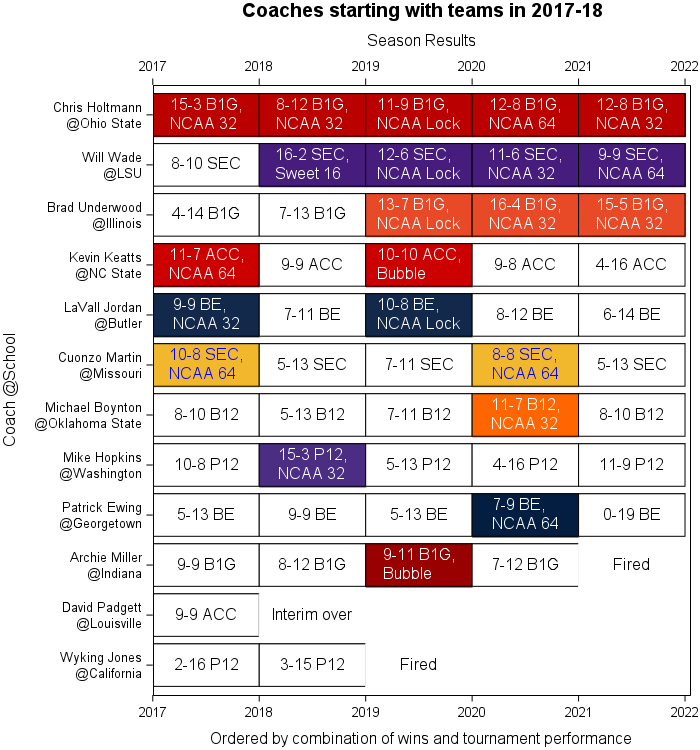 Let's work our way from the bottom to the top.

Wyking Jones: One tweet from 2017 reads "Cal just hired a guy who doesn't have his own Wikipedia page as head coach. Feel like that's a baseline requirement." Wise words. Jones was fired after two years for going 16-47. (FYI Keatts got his Wikipedia page in 2014 after being hired by UNC Wilmington.)

David Padgett: He did fine for an interim coach but was never expected to be the long-term solution for Louisville.

Archie Miller: Hey, remember that guy that played for us in 1998-2002? The guy that coached Dayton in the Elite Eight? The guy that we really wanted to hire in 2017? The guy whose dad told the Dayton Daily News that NC State "wasn't gonna happen" because "You gotta have trust in the people above you that they’ll stand by you."? Indiana only stood by him for four years. He made the NIT quarterfinals once.

Patrick Ewing: When Omer Yurtseven transferred to Georgetown he said "I needed a big man coach and I don't think anybody is better than Patrick Ewing when it comes to the experience he has as a player." That coach has zero winning Big East records in five years. Ewing got a contract extension from a surprise conference tournament championship and then lost 20 straight Big East games. (To be clear, I like Yurtseven and wish him well.)

Mike Hopkins: This was the coach-in-waiting for Syracuse who couldn't wait any longer for Jim Boeheim to retire. Hopkins turned Washington around quickly and won Pac-12 coach of the year twice. But since North Carolina blew him out of the 2019 NCAA Tournament, he hasn't even gotten an NIT bid.

Mike Boynton: A school should have low expectations when they hire a 35-year-old with no head coaching experience. (A school other than Duke, of course.) Oklahoma State has done pretty well despite the situation with the previous coach only staying one season, a tough Big 12, and one of the most unfair postseason bans ever handed out by the NCAA. Still, there's only been one winning conference record in five years, and it was the year he got the #1 recruit by hiring his brother.

LaVall Jordan: Unlike the other coaches on this list, Jordan inherited a program coming off a Sweet 16 run from Chris Holtmann, who jumped to Ohio State. I don't know what your expectations are for Butler, but Jordan is no Brad Stevens. Three losing seasons in five years.

Kevin Keatts: Yeah, this season stunk. You can blame Keatts, blame assistants, blame injuries, blame the NCAA issues, blame the none-and-done recruits, blame Covid, whatever. Just give him credit for the four consecutive seasons at .500 or above in the ACC. That's something that Sendek and Valvano never did. Like in most professions, coaches with three to eight years of experience aren't always going to beat guys with decades of experience.

Brad Underwood: It took him two years to match the 11 conference wins that Keatts got in year 1. Yes, Illinois has done better lately. Still, I wonder how well he'd have done if All-American Kofi Cockburn had a season-ending injury in the first minute of the first game. Underwood also damaged Oklahoma State in his one season there by hiring an assistant that got caught up in the bribery scandal, giving the Cowboys a postseason ban years after he left.

Will Wade: Speaking of the bribery scandal, we have Mr. Strong-Ass Offer himself. LSU just fired Wade, three years too late, after the NCAA finally hit them with seven Level-1 violations for basketball. I hope the wins were worth it. A multi-year postseason ban is likely.

Note that the 12 coaches here have combined to play ZERO games in the second weekend of the NCAA Tournament in the last five years. (LSU suspended Wade for the 2019 postseason.)

For those who want to move on, be careful what you wish for. 80% of these coaches have clearly done worse than Keatts. What are the odds that someone else would do better? And even if you want to roll that dice, "better" doesn't mean that we would start kicking Kansas and Kentucky around. It includes the levels of success of a Mark Turgeon, Shaka Smart, or Herb Sendek and we'd complain about that too. I think the Keatts ceiling is still high and I hope we get to see it.