Last week, I talked about the twelve coaches that were hired by a major conference school in 2017. One was an interim coach. Three were fired for performance. One was fired for recruiting violations. Four have mostly been worse than Keatts. One is Keatts himself. Two have had a better tenure so far. Going by these numbers, roughly 80% of coaches have done worse than Kevin Keatts.

I know it's hard to hear this after the 21-loss season and players entering the transfer portal, but I'm going to say it anyway.

"Forget that!", I imagine you saying, "Look how fast that Iowa State and Wake Forest turned things around! Look at how well that Arizona and UCLA and Arkansas have done!" Yeah, that happened. Maybe their success will last, maybe it won't. Maybe they'll crash like Will Wade or Steve Prohm did. Maybe they'll beat Coach K's records, I don't know.

I do know that success is rare. Go one year after our last coaching vacancy and look at the 2018 hires. They say that a coach needs four years to get all of his players in, right? Let's see how they did: 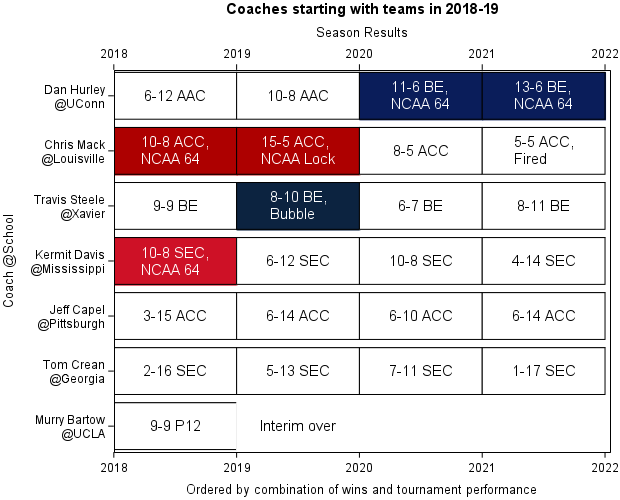 Oof. Seven coaches, four years, zero NCAA Tournament wins. Dan Hurley with UConn is the only one to even get a bid in the last two years. It's tough to grade Chris Mack. He was 38-23 in the ACC. That's a nearly elite win percentage. I was surprised by Louisville's tournament snub last year. But then there was drama where a fired assistant tried to extort him over minor recruiting violations. In any case, Mack lost the support of the players, the admins, and the fans. Louisville will be paying him $133,000 a month for the next three years. Travis Steele was just fired. I think it's pretty clear that Kermit Davis (64-61), Jeff Capel (51-69), and Tom Crean (47-75, fired) have all done worse than Keatts.

I'm going to say that Keatts is doing better than 80% of these guys too. But maybe that's just another bad year though? Let's go back to 2016, the year before we hired Keatts: 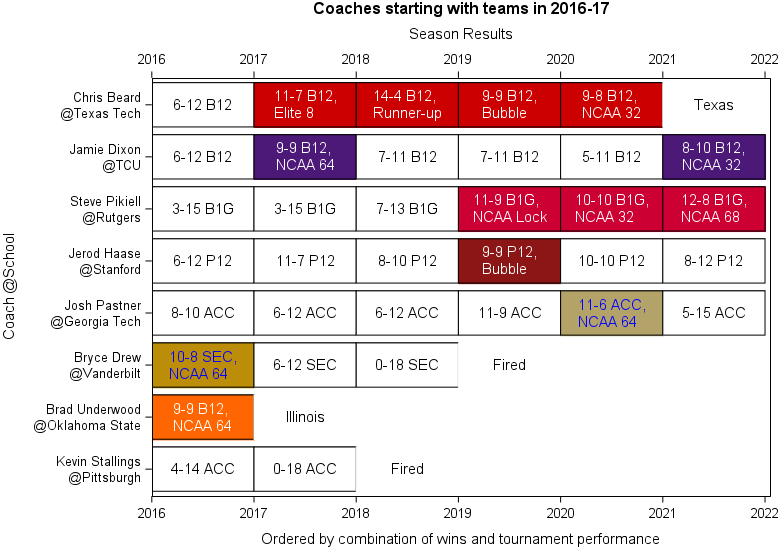 The only one who clearly exceeded expectations is Chris Beard. Jamie Dixon at TCU has made the tournament twice but has yet to go above .500 in the Big 12. Steve Pikiell has done a great job at turning Rutgers around. Still, not beating the world. Jerod Haase at Stanford has yet to coach a tournament game. Josh Pastner has an ACC championship but not much else in six years. And at the bottom of the barrel, there's Bryce Drew and Kevin Stallings, both fired after going 0-18 in conference.

Once again, I'll put Keatts ahead of 80% of these guys.

The hires of 2016-18 weren't just a bunch of losers, by the way. There were a lot of good resumes and associations with high-level programs. Indiana and Louisville hired someone with a recent Elite Eight. UConn hired the Atlantic 10 champion. Georgetown hired an 11-time NBA All-Star. Mike Hopkins (Washington) was named as Jim Boeheim's successor for being at Syracuse for 20 years. Jerod Haase (Stanford) was once the UNC junior varsity coach like Hubert Davis was. Jeff Capel (Pittsburgh) had an Elite Eight and was acting head coach at Duke when Coach K had back problems in 2017.

In the last five years, Kevin Keatts has done better than most of these guys. "Oh come on!", I imagine you talking again, "He's clearly trending down though. Started with 21 wins, just had 21 losses. It's a bad trajectory." Yeah, okay? I'm sorry he turned Gottfried's program around so fast. Sorry we beat five ranked teams in the first year. Sorry we only went 9-8 ACC last year (better than Duke and Miami) despite losing Devon Daniels and Thomas Allen. Sorry we didn't beat any Final Four teams this year. Sorry we didn't beat #1 Purdue in overtime. Sorry we had injuries to Bates and Gantt and Morsell and Allen and Ross. Does Keatts get any credit for positive trends? We have a win streak against Virginia. Seabron was voted the ACC's Most Improved Player. Smith broke the school freshman 3-pointer record and was on the conference All-Rookie Team. If they go pro, is that evidence that he loses players or that he develops them?

I'd rather be in our position right now than starting over like Maryland, Louisville, Kansas State, Missouri, South Carolina, etc. are. They're going to be reminded that success is rare.