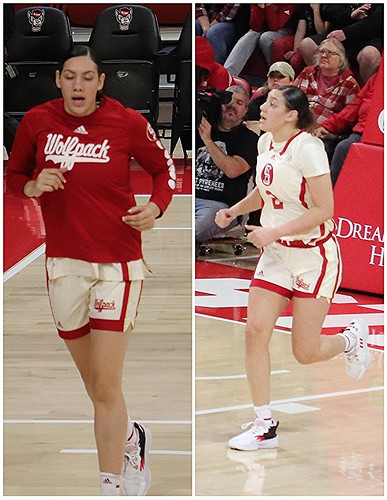 State's record with regard to Louisville is 6-8; however, State has won the last three meetings winning at Louisville, in Greensboro and at home. Louisville won 6 straight between 2017 and 2020.

Louisville has three players which should concern State (not saying that all Louisville players should not concern State-not at all). First and foremost, State has to be concerned with five-seven junior Hailey Van Lith who is scoring 21 ppg while shooting 439 from the floor; 255 from the arc (the arc shooting percentage surprises me-thought it would be much higher). Hailey is second in scoring in the conference just behind Ta'Niya Latson. If Louisville needs a bucket, Hailey gets it.

The second player for Louisville that might concern State is six-two grad student Morgan Jones, the former FSU star. Jones's, averaging 10.7 ppg, play up until the FSU game really did not jump out, but against FSU and maybe because the game was at FSU, Jones had 25 points shooting 9-10 from the floor; 7-8 from the line.

The final player of the top three players of concern for State in Sunday's game is center six-three junior Olivia Cochran who is averaging 9.2 ppg. State has had a difficult time scoring and defending against talented centers and Cochran is talented. She has always played well against State.

If Louisville was playing the State team going into Christmas break and especially the one after the Iowa game, I would easily pick State. It is hard to predict this one because it is unclear who will be available for State. State could suit up anywhere from 7-10 players. Of the three players who either did not play against Miami or got injured during the game (River), my guess is Jessica Timmons will be able to play but River Baldwin and Jada Boyd will not be able to play (Jada more likely to be ready to play than River). Winning with seven healthy players at home is one thing, but on the road against a really good team, it is another.

A point about Mimi Collins. She plays much better when she is a starter. Mimi played well as a starter against Miami (11 points-tied for leading scorer) and against Georgia (19-leading scorer) two pretty good teams. When she does not start, she seems to struggle.