Offensive Efficiency Not A Problem For NC State

Share All sharing options for: Offensive Efficiency Not A Problem For NC State

Disappointment is not the right word, but it's been hard to escape the feeling that NC State hasn't met its full potential in the early stages of the season. The surprising blowout loss to Oklahoma State probably has a lot to do with that impression, and we've seen how foul trouble can really stall this team. Still, I mean, look at this: 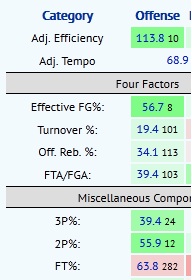 NC State is 10th nationally in adjusted offensive efficiency and one of the best shooting teams in the country to date. Richard Howell and T.J. Warren should be thanked for that. The offense has above-average numbers in all of the categories shown above save free throw shooting. State can play out of control at times--it just part of this team's identity--but it almost seems like the chaos is good for the Pack, and when the guys are able to get out in transition, life becomes very difficult for opponents.

Hell, even after opponents make baskets, they are in danger of giving up a bucket within five seconds. Lack of awareness after a made shot cost Cleveland State a time or three on Saturday, and when was the last time we could expect that sort of thing? And bear in mind that State has put up these numbers despite the fact that Lorenzo Brown is in the midst of an extended scoring slump. He has the lowest effective field goal percentage on the team of anyone not named Tyler Lewis.

While the offense has appeared disjointed on plenty of occasions this year, the fact of the matter is that it's been really good overall. Honestly my eyes take a gander at these numbers and they're like, "LOL YOU LIE." I guess I just never forget a missed free throw. It is my curse. What's scary is how much better this offense can be, from an execution standpoint.