Pickin' Up That Defense

Share All sharing options for: Pickin' Up That Defense

NC State can outscore anybody in the country, but there will be days when State is limited offensively either by the opposing defense or the randomness associated with hurtling a large round object at a cylinder of theoretically-proportionate size . Diversity is crucial to success for a basketball team that hopes to be better than average, whether its an offense that compensates for missed shots with a low turnover rate or high offensive rebounding rate, or a defense that shuts down the paint and rebounds well while eschewing turnovers.

NC State has had few problems at the offensive end, but its style of play may be part of the reason why it is struggling so badly at the defensive end.

The Wolfpack is a team of runs on both ends of the floor. These aren’t the normal runs of basketball cliche, they’re the runs of a degenerate gambler. On defense the gambler is often Rodney Purvis leaking out before NC State secures the rebound. Nearly two-thirds of the time, it’s a good gamble because the Wolfpack corrals the rebound. Otherwise NC State’s defense struggles to get reset, and the opponent gets a second chance with the odds in its favor.

Here's how State's defensive factors are looking at this point: 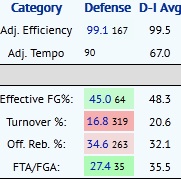 It is possible to build a good defense based on the strengths and weaknesses seen above--call it the Jim Calhoun Model. The difference is that Calhoun's teams ranked among the nation's top 10 in 2FG% defense on a regular basis, they blocked a shit-ton of shots, and they were really good at avoiding fouls. Eschewing turnovers and defensive boards is bearable if you can operate like a Calhoun defense, but NC State is not doing that, and oh god, the pain. The pain.