Devonte Graham down to NC State and Kansas

Share All sharing options for: Devonte Graham down to NC State and Kansas

Point guard Devonte Graham trimmed his list on Wednesday to NC State and Kansas, and a decision is expected in the next couple of weeks, according to his AAU coach. Graham, once the hostage of spectacular head coaching failure Jason Capel, finally got out of his LOI with Appalachian State after Capel was fired this spring.

I felt good about State's chances with Graham until I saw the tweet in which he announced his final two. 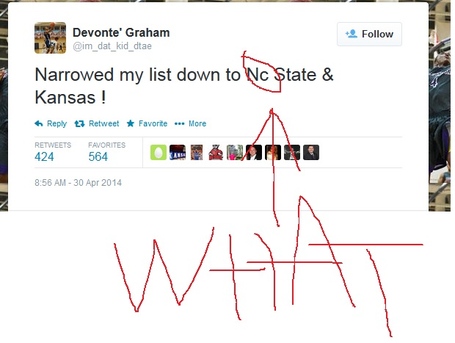 An upper-case N, as per standard practice, but a lower-case C ... how do we interpret this, and where do we go from here? Did his shift keys betray him at the last moment? Why didn't he immediately go to the caps lock option? Should all of the Carolinas be offended by that lower-case C? Is he making a political statement? These questions may haunt the university, and indeed the entire region, for decades after Graham's decision.