11th place ain't what she used to be

Share All sharing options for: 11th place ain't what she used to be 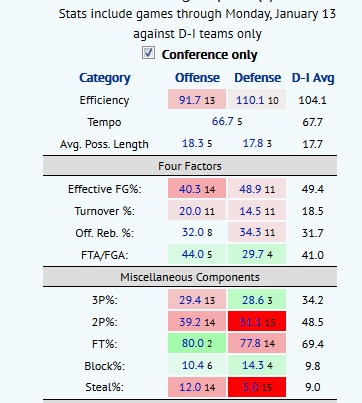 Probably the most amusing thing about all of this is the fact that State is actually shooting 80% from the line. State so far has reversed a couple of weaknesses (getting to the line, making free throws) despite not being able to count on any of the things it might have thought it could heading into January.

The Pack's already had to contend with a couple of the nation's top 20 defenses, but unfortunately, the league is skewing toward D this season--eight teams rank in the top 50 in defensive efficiency. If the Pack is going to make a push over the next month and a half, some answers not named T.J. Warren will be necessary.

It will also be interesting to watch how the inevitable decline of the Pack's three-point defense affects the rest of the season. Opponents have been terrible from three all year, and the odds of that remaining the case are not great. (Unless we all band our lucky coins together to form one super magic coin of good fortune.) Then again, maybe this is how the basketball gods are trying to even out the nonsense that is our opponents' accuracy at the free throw line.