Mike Glennon went as Tom O'Brien for Halloween. It was spot on. 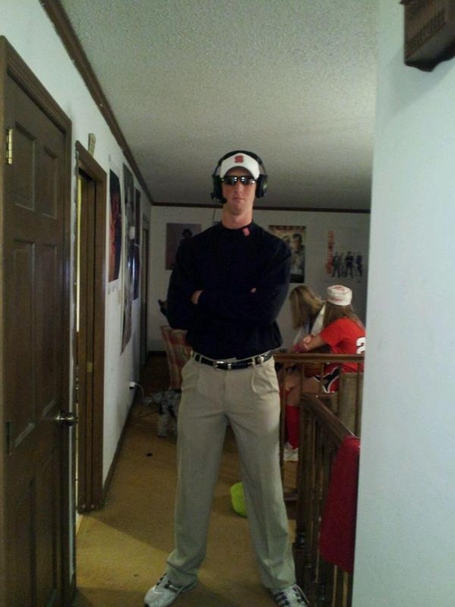 That could be TOB from 40 years ago. And naturally, Glennon is TOBing in this photograph. It's a crucial aspect of the costume. Joe Giglio has the side-by-side comparison.

TOB said no to a reaction, as is his way.

What was your reaction to Mike Glennon's Halloween costume?

I have no reaction.

He was Tom O'Brien!

Good for him. My son used to do that all of the time, too.

I'LL REACT YOU! *kills reporter* (It turns out TOB had no idea what Glennon's costume was when asked the first question, but I like to imagine he knew all along, and his reaction was to have no reaction, which is his reaction to most things, probably.)

Also, basketball walk-on Staats Battle dressed up as Richard Howell, beard, tattoos, and all. It was great. I have to figure out where he got that ink done, because that is some high quality stuff right there. Not that I have any need for a tattoo, but for some reason I've been drawn to the image of a flaming basketball for as long as I can remember.