Behind the scenes on a Wolfpack road trip: There are lots of slide shows

Share All sharing options for: Behind the scenes on a Wolfpack road trip: There are lots of slide shows

Road trips are probably not super exciting for players--the part of the trip before the actual game, anyhow. In this video from State's trip to South Florida, we see the Wolfpack prepping for the game with routine meetings, which means slide shows! It occurs to me that college football players in general must have to endure a lot of slide shows during their careers. And you know how well coaches are known for their compelling slide shows.

Here is an inside look at part of Dave Doeren's presentation: 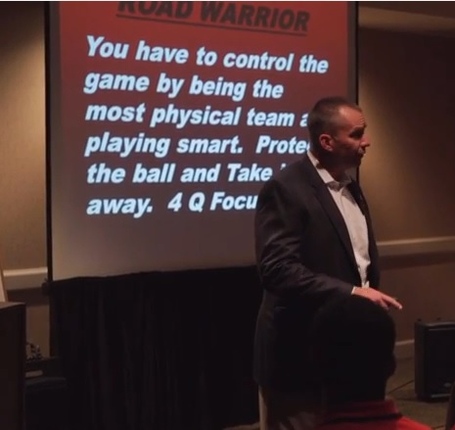 Randomly Capitalized words! If I were a coach my pregame talk would include only one slide and it would say "Be better at Football Than them or else You might lose and that would be BAD (Imagine me shaking My head in disapproval at you Right Here)."

I wonder if there's a culture shock for players after they graduate and they are no longer constantly inundated with motivational cliches and other standard coaching rah rah stuff. Maybe there's a guy somewhere who can't get his workday going unless his boss comes over to his cube at 9 a.m. and goes, "let's get out there and get after it!" Then he's fine. But if that doesn't happen, he's an aimless and barely-functioning human being all day. I'd probably put "Hard work beats talent when talent doesn't work hard" plaques in every room of my house to be safe.

The video also offers a glimpse at the team's goals for 2014: 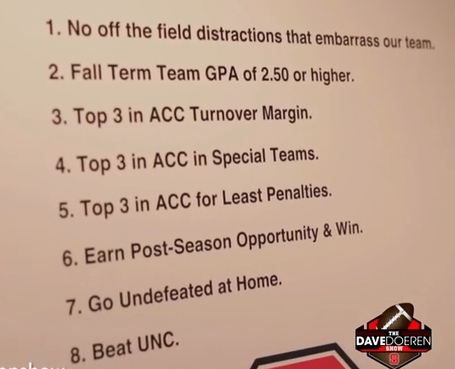 This is obviously an abridged version of the list, because usually "Beat UNC" is down at No. 100, right behind "Remember to wash hands after using the restroom" at No. 99. This list never needs to be adjusted manually--Matt Canada simply screams at it until it is properly ordered for the occasion.