Share All sharing options for: New research finds origin of NC State S--- dates back to at least 1920

With a tip of the cap to Tyler Dukes and Tim Peeler for the find, I have been looking through this archive of Technician issues that includes editions from way back in the 1920s. I actually only looked through a few of them, but what I found will SHOCK YOU TO THE CORE. No wait, it's the opposite of that.

I have discovered that the roots of NC State Shit go back nearly a full century. That much is certain; the Stuff's precise date of birth remains a mystery, but we've taken a considerable step toward uncovering it once and for all.  Previously, scholars thought the Stuff was a construct born in the agony of the last decade or so, perhaps originating from Twitter. They were terribly, terribly wrong because as it turns out, the data was incomplete.

See here the nod to "NC State's old jinx" in the description of a football defeat at the hands of Georgetown, way back in October of 1920: 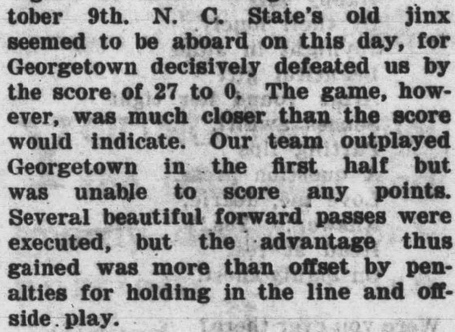 Just two issues later, another reference to that "old jinx," this time in the description of a loss to VMI:

The author of this item was certain that the better team lost, providing a thorough outline of his reasoning: 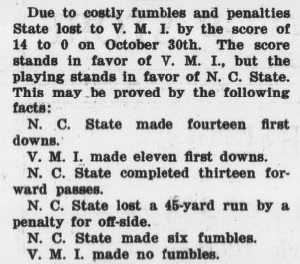 I would have to agree that that is indeed some shit right there. We owe VMI one big time. State's star back at the time, Terrence A. McClendahan, could run roughshod over foes large and small yet also was frequently guilty of callous regard for the precious football. Clearly this day was not his best.

(For positive football news, see the front page of No. 15 for details of State College's win over VPI.)

On one momentous day, however, the "old jinx" was nowhere to be found--the Wolfpack defeated North Carolina that season, and the win is discussed at length in the 14th issue under the triumphant headline "State Conquers Carolina!" Toward the end of the article, the author takes the opportunity to rub in the victory a bit, though to hear him tell it, the Heels started it: 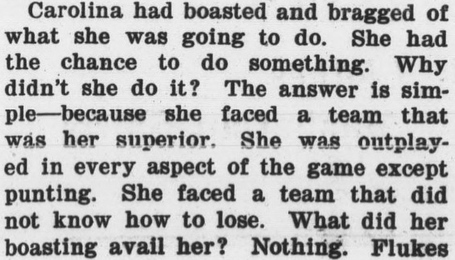 Don't start none and there won't be none! And they can have the damned punting, too. /spits

I do not know what in the hell that means but surely we can work this into some cheers moving forward. If it is turpentine that wards away NC State Shit, then we have been failing ourselves for a long time.