It's time for NC State to win one for Snoozie

Share All sharing options for: It's time for NC State to win one for Snoozie

NC State and Presbyterian first played each other on Nov. 1, 1930, in Asheville. Unfortunately, the Wolfpack weren't any good that season, and on that day in particular, they were not good enough to beat the Blue Hose. It was a defensive struggle throughout, with a first-quarter safety secured by Presbyterian providing the game's only points.

That safety came at the expense of State's Snoozie Morris, who fumbled the ball away in his own end zone. The Nov. 7, 1930 edition of Technician has details: 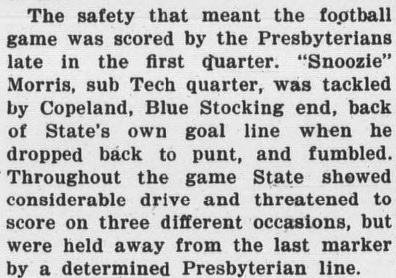 The description of the contest from Technician is truly horrifying, with mention of multiple first-down punts. Football in 1930 must have been rough on the eyes what with that sort of extremely conservative strategy being common. I assume it was common since there is nothing in the article to suggest that it might have been an atypical tactic. No all-caps ranting, no exclamation points or question marks, and no swears. It was a sad time for football. Near as I can tell, this was the most exciting moment of the State-Presbyterian game: 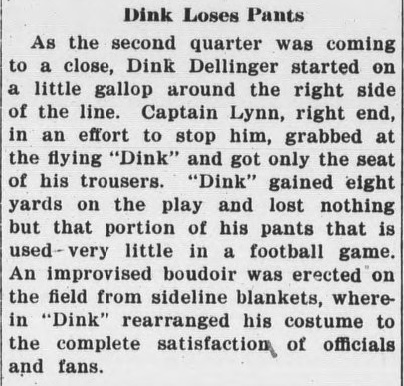 But never mind that--the 2-0 defeat at the hands of those pesky Blue Stockings means we have unfinished business! Our boys have not played these South Carolinians since that day. Poor Snoozie's demons have never been exorcised. On most afternoons, coughing up the football for two points isn't going to be a mistake large enough to cost the game. In this case it defined the game and perhaps tarnished Snoozie's legacy forever.

The play might not have been Snoozie's fault, for all we know. If he was hit in the end zone, then there probably was a breakdown by his teammates at the line of scrimmage. Snoozie can't block and kick the damn ball at the same time, for heaven's sakes. But calamity lands with no regard for circumstance or fairness. Snoozie bore the mark of it for the rest of his life, cruelly denied even an attempt at closure with Presbyterian.

We have the opportunity now to make this tragedy right, to put an end to 8+ decades of pain and heal together. You, me, the Wolfpack, and Snoozie. Let's bury this dark moment in history forever. Let's go get one for Snoozie.