NC State played a role in the demise of Burt Reynolds' football career at Florida State and the beginning of his acting career, way back in 1957. No, really. I hadn't heard about this historical footnote before Tuesday (thanks, Tim!), but it's true--after Reynolds was beaten by Dick Christy for the game's only score, he got an earful from FSU's coach, and he decided he'd had enough of football.

Reynolds could be forgiven for his mistake given that it came as the result of an illegal--er, crafty (unprecedented?) veteran move. Christy ran out of bounds and into the FSU sideline during the play late in the second quarter, apparently ran all the way behind the FSU bench, returned to the field of play, caught a long pass, and scored. Those were the only points scored in the game; somehow, Christy was not penalized for his field trip out of bounds.

Reynolds became the goat, and the rest is Hollywood history.

"My side of the story is that, first, he ran out of bounds," Reynolds said in the fall of 2006. "Secondly, I think he ran behind our bench and came back on the field. He just disappeared out of my line of sight and was behind me.

"The ball player that played against Dick Christy was not the same ball player I was as a freshman. That's not to say that he wouldn't have gotten behind me anyway. He was a great, great ball player, and the person responsible for starting my acting career. After that game, I am going off to become a movie star."

When I try to picture how the play unfolded, I can't do it without seeing Christy stroll casually to the bench, stop, take off his helmet, and chat with FSU players for a few minutes. After downing a cup of water, he says his farewells and makes his return to the field, where the play is miraculously ongoing (herculean effort by the NC State offensive line, no doubt). He stands calmly 30 yards from the line of scrimmage, waves back to the quarterback, and then the ball is on its way to him.

Sadly, Technician's account of State's 7-0 win includes no details of the sequence, as though Burt Reynolds were not yet famous or something. 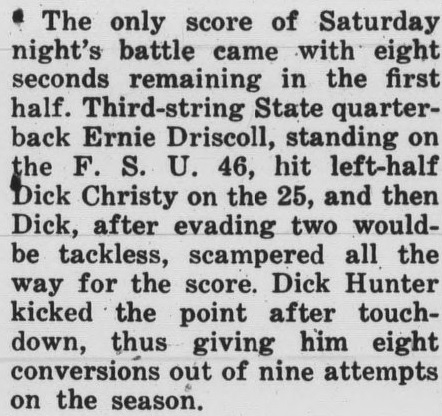 The article did include a box score, though.