Share All sharing options for: Austin & The Moose Discuss Week 4

So, yeah, Saturday's game was weird. State won handily but managed to wipe away any positive feelings I had coming out of last week's game against USF. That truly is an amazing accomplishment. I felt like Presbyterian had the ball for 45-50 minutes of game time but was so terribly inept it didn't matter. And it seemed as if every play on offense, Jacoby was looking to throw a 200-yard touchdown pass. Like it was all or nothing. Was it weird, or is it just me?

And can I be a little concerned that Presbyterian was...sorta...successful on offense? State allowed them to convert quite a few third downs, they threw it well. It's probably the highest yardage total they've generated against a D1 opponent. That's a bit frightening.

Any thoughts on Saturday's game before we get to, uh, the elephant in the room?

Yeah I tend to agree with you about the Presbyterian game, despite the final score, being discouraging overall. It was after all a single score game for almost the entire first half, and the Pack offense punted on three of its first four possessions - half of which were three and outs.

And the defense, yeah, shutout or no they let Presbyterian stay on the field for far too long. The Blue Hose converted a 3rd downs of 5, 13, 6, 6, 7, 8 and 7 yards all against the Pack's first string defense. They were actually just 1-of-1 on 3rd downs of five or fewer yards so the Pack did relatively well on the first two downs only to watch Presbyterian convert nearly 40 percent of its long third downs. That's.... that's not good.

That's another textbook example of a slow start, the thing that keeps plaguing the Pack under Doeren. It cost them several games last season, it made the first two games of this season much more entertaining than I'd like to see and it made Presbyterian believe for about 30 minutes that it could maybe actually do football things. Granted, sanity eventually took over and the Pack started treating the Blue Hose defense with the sort of disdain it did the South Florida offense.

The final box score is gonna show over 8 yards per play and a six-touchdown win, so what matters now is that elephant in the room in the shape of the Seminoles. So... yeah.... I've already started to look at those past results against the 'Noles in Carter-Finley Stadium and its allowed stupid things like hope into my mind. Please talk some sense into me.

"Abandon all hope, you who enter here."

There is absolutely no way on this earth why you should think NC State has a chance against Florida State. None. Zero. Recent history (2010, 2012) allow the idea of an upset to wiggle into your brain, but be careful. The 2010 NC State team was actually pretty good, finishing the season ranked in the top 25 under the guidance of Russell Wilson. Wilson, if you'll recall, was run off by Tom O'Brien. And really, State was going to lose the 2010 game were it not for Ponder going all stupid.

And then look at the 2012 game again. That FSU team was really, really good. And for some reason, they came out of halftime with a plan that neutered everything about that offense. They averaged 51 points a game heading into Raleigh and then put up just 16? I put that loss on Jimbo more than give NC State credit for the win.

The bad thing about this weekend's game is that FSU has a formidable offense and strong defense. And while State has shown flashes of competence on offense, its defense is sorely lacking. Combine those with a propensity for starting slowly and this game will likely be over by halftime. The *only* positive is that it's at home.

But hope? There should be no hope.

Oh man, that was like a refreshing cold shower. I needed that.

While its true that this version of Florida State is a bit weaker than last year's - mostly because the offensive line has struggled and they just can't run the ball - they are still a monstrously talented team. And they'll have their quarterback back, who actually does appear to make a huge difference since the back-up went full 'deer in headlights' and I think he'd definitely do the same on the road this week if he had to play. What I'm saying is the Pack's only hope is if they let Jameis Winston speak sometime this week but Jimbo Fischer probably has him about like this right now: 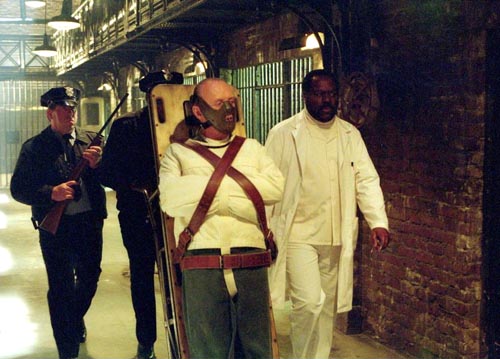 I feel like this will be a decent measuring stick for the Pack however, even if it results in a multi-touchdown loss. If they can move the ball on FSU's defense with any regularity then I'll become a real believer in the offense going forward, because that will almost certainly be the best defense they face (Clemson at home might play better than FSU on the road, but I think talent-wise FSU still wins out). If they hold Florida State under 35 points or so, I'll start to believe the defense is something other than a train wreck into a dumpster fire. I don't think fans should focus on the final score so much as how the Pack plays on both sides of the ball, and whether they can execute some of their game plan against a much more talented team.

Alright I guess its prediction time. I'll start this week and let you close us out. I'm going to predict a pseudo competitive game for about a half before Florida State puts the clamps down in the 3rd quarter and finishes off the Pack by lets say a 42-24 score. Not great but you didn't get embarrassed.

I agree with everything you said regarding this being a great opportunity for State to show us what they've got. If I try to add on to your insight, it'd just be a mess, so let's get to the prediction and the gif.

Florida State is so much better than NC State in just about every way. Better offense. Better defense. Better special teams. Better coaching. Better athlete-driven scandals. And there's absolutely no doubt in my mind that NC State will win this game 31-27.